When getting lost on Nantucket, it is prudent to bring a telescope and six strangers. I advise you, the reader, to do this as it recently happened to me and it was a whole lot of fun. My name is Nick Tepper, and I have spent the year as a TerraCorps member serving for Mass Audubon’s Conservation Science Team. Be it through citizen science or public outreach, most of my job involves sharing the plants and animals in Mass Audubon’s sanctuaries with the public. In this story, I lead my first ever “birding tour” on a spring break trip organized by one of my fellow TerraCorps members: Sam Kefferstan. Sam had planned a Mass Audubon alternative spring break for low income UMass students that don’t have the copious financial support needed to take in an internship or job in land conservation. He asked me to come along to provide the trip with outdoor flavor, and to find birds/ yell things about those birds to college students.

I’m fairly good at yelling about nature, and I had always wanted to experience Nantucket, so I took the offer right away. One of our “marks” for the trip was the Barn Owl, a beautiful and elusive species that can only be seen locally on Nantucket. Barn Owls are to birds as Alicia Keys is to humans, so I thought it would be a wonderful way to get these students hooked on the outdoors. The only bump-in-the-road was that I had never been to Nantucket, and objectively had no idea where to go to see these owls. I checked some eBird reports, but there was nothing conclusive about the location where Barn Owls were being seen. I ended up using some historical reports to pick an address that I thought would give us the best chance to see our quarry. On the first night of the trip, the students and I set off on our hunt while Sam set off to get us some much needed pizza.

I have a long history of phone troubles. Many of these troubles involve water, blunt objects, and the ground (or the “floor” as it’s called indoors). My dilemma concerning this specific trip was that my phone had no idea where I was in time or space. The GPS had succumbed to blunt force trauma, and I was out of directions. When we got lost not five minutes into the trip, I wasn’t too surprised. I knew the owl spot was on the southern part of the island, so I drove our Mass Audubon mini-van south on frightening sand roads with many literal bumps-in-the-road that could swallow a Prius whole (This is not a hyperbole. At a similar point in time, a similar depression had actually swallowed Sam’s Prius with all of our pizza in tow). When we somehow got to the end of the road (literally), we got out of the car to discover we had hit the southern shores of the island right for an amazing sunset. The place we ended up (wherever that was) looked like the moors of Ireland meets the Bahamas. The water was an impossible blue and the heathlands went on for miles. The students seemed to like the cotton candy in the sky, and figuring we were out of luck for owls, we all sat down to enjoy….

Not a minute had passed when one of the students pointed and said “ a big ol’ bird just landed in that dune!”. I picked up my camera, and all of a sudden a Barn Owl exploded from where she was pointing and hovered effortlessly across the moors. Another minute and another appeared further off. I said A LOT of curse words, and everyone was pumped. 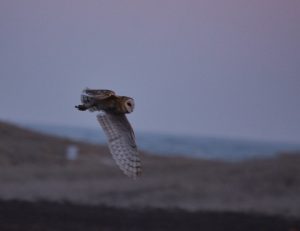 We were passing binoculars like hot potatoes, and I grabbed the telescope so everyone could bask in our new found glory. At one point one of the owls came in so close that everyone could see his heart-shaped face and golden wings with the naked eye. Once the sunset ended and my blood pressure dropped below the “danger-zone”, we headed back to the cottages, and at one point one of the owls hovered 20ft from the van, dropped and grabbed a vole, ate it in front of us, and exploded off into the night. We all sat speechless for what seemed like minutes before simultaneously exploding in manic laughter.

Once my group’s mania had subsided, we began another quest: find Sam. As aforementioned, Sam’s prius was stuck in a sandy grave. No one will ever know if it was him or I who muttered more curse words that night. Sam had never arrived with the pizza, and after losing communication several times (his phone had died), it became apparent he had gotten stuck. We searched for him for an hour or so, but to no avail. Finally we retreated to the cottages to wait. Sometime later, he appeared, cold pizza and all, towed from the sand by some island locals. As we all rejoiced in cold pizza and shared our successes and failures, it became apparent that none of us would ever forget this once in a lifetime trip. I certainly won’t. 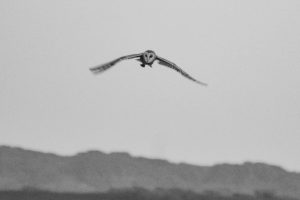 Nick Tepper is serving as a Land Stewardship Coordinator at Mass Audubon Headquarters for the 2018-2019 TerraCorps Service.