One of my main goals this year as a split service member for the Buzzards Bay Coalition and Wareham Land Trust is to increase visitation to properties in the Greater Wareham region.  Specifically for my “Walking Through Winter” series, I chose locations that were in some way connected to the Wareham Land Trust (whether through direct ownership, CR ownership, or partnership).  The programs took place on the second and third Sundays from December 2017 – February 2018 and wrapped up with a low tide beach exploration on March 11th.

For all seven programs I was assisted by Joe Burroughs, a local volunteer who runs his own survival classes in the area.  The general theme for all the programs was local wildlife and some plant identification.  We used reference sheets to look at wildlife tracks and scat on the trails we visited and looked for other signs of animal activity.  The weather varied greatly from program to program, but even on the most miserable day I had three people show up to explore Minot Forest and part of Bryant Farm.  The most well attended program was the Great Neck Conservation Area hike on February 18th.  Twenty-one people showed up for the approximately two-mile hike, which was led by Joe Burroughs and Skip Stuck, a Wildlands Trust volunteer.

The final program was intended to celebrate making it through winter and encourage people to get out and enjoy the warmer weather.  However, Mother Nature didn’t see things my way.  This week we have seen temperatures vary from the mid-30s to the high 40s.  Despite this, I still had eighteen people show up to explore North Water Street Beach, a section of shoreline in Onset owned by the WLT.  We were able to find lots of shells from local marine species such as channeled whelks, moon snails, periwinkles, blue mussels, Quahogs, soft-shelled clams, blood arks, and bay scallops.  We also found carapaces of spider crabs and a claw of another crab species which I couldn’t identify.  On the water we saw a variety of gulls and some buffleheads.

The Standard Times sent a journalist and a photographer to cover the program as well and we made the front page of Monday’s paper! Check it out here: http://www.southcoasttoday.com/news/20180311/walking-through-winter-series-wraps-up-sunday. 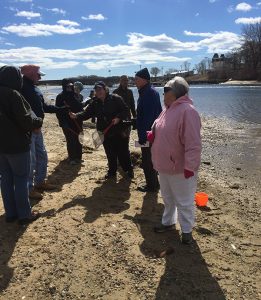 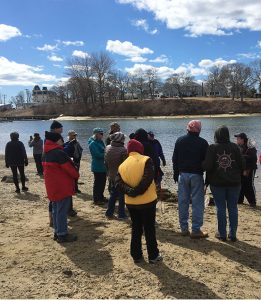 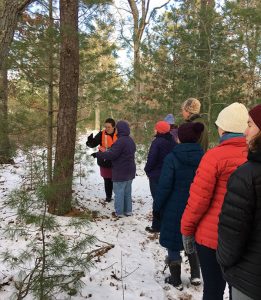