The Gorge après Gorge was started 13 years ago by two women, Tanya Rapinchuk and Leslie Charles, who wanted to get outside with friends and enjoy nature even as the weather starts to turn wintry in the hills of Western Massachusetts. Since then, on every Sunday after thanksgiving the two have organized a growing group of friends and neighbors in a potluck and walk along the East Branch of the Westfield River at the Chesterfield Gorge in Chesterfield. The event has grown over the years to include a timed 5k trail run, and three years ago Hilltown Land Trust was brought on board to help plan and run the event.

As the TerraCorps Community Engagement Coordinator for Hilltown Land Trust, I helped with aspects of the event both big and small, from organizing volunteers and seeking sponsorships and in-kind donations from local businesses, to boiling water for the hot chocolate early on the morning of the event and making parking signs. On November 26th, we had 200 people show up to run, walk, and cheer.

It’s a great event, and the biggest one that Hilltown Land Trust does all year, but what makes the event truly special are all the personal touches: the hand-knit and -crocheted hats prizes for the fastest runners, the cookie medals for all the race finishers, and the potluck that includes homemade baked good. It is truly a unique, community-focused event, and it has been an honor to be involved. As a knitter, though, my favorite part was watching one of the race winners choose the hat I knit as her prize. I had to run after her to get a picture as she was leaving! 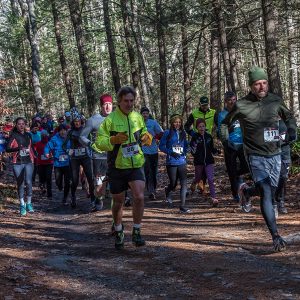