Starting my TerraCorps service year brought mixed feelings. By the time I applied to be a service member in October 2018, I had lived in four different houses over the course of just nine months. When I received the offer from the Buzzards Bay Coalition to serve with them, I was elated. I was so excited to be working with the public and sharing my passion for the environment with them.  Yet, I was most excited about living in one area.

But then the reality hit me: I was starting my service year a month later than most people. While they 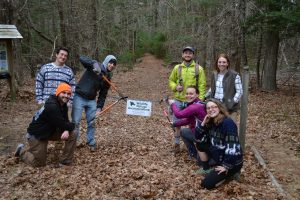 Slowly but surely, my role became clearer and I fell into my own at my service site. Also, after a few retreats with TerraCorps service members, it felt like I had not started late at all.

I felt like I was starting to get a grasp on living in New Bedford and serving with the Buzzards Bay Coalition. That is, until a monthly report asked the question: “Give an example of a way or a time that you felt connected to your community” and I was at a loss. There were people who I saw regularly, but I still didn’t feel connected.  That got me to thinking about why.

I was lucky that at the same time, I started hanging out with my co-worker, Claudia, and my supervisor, Rebecca, more. We would go for drinks, trivia, or to catch a glimpse of whales off Plymouth together. This allowed me to build the drive to start branching out to other people who I saw regularly.

As the Buzzards Bay Swim was fast approaching, I connected with some women from the YMCA who were planning on doing the event.  I began swimming with them several times a week in preparation for the event. Even though the event has passed, we still get together to swim at least twice a week.  We catch-up and enjoy a nice swim in the bay – Rebecca and Claudia will join on occasion too! 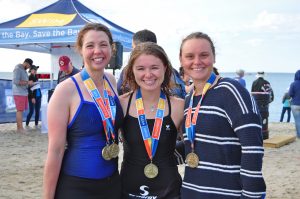 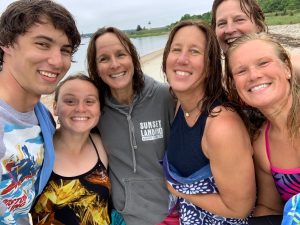 Almost ten months in, I wish I could have told myself when I started that everything would work itself out. Building friendships and a community take time, so you have to be patient. If you had asked me a year ago if I was planning on staying in New Bedford after my service year, my answer would have been “Heck no!”  Now, I am sad at the thought of leaving thanks to the community I have built for myself.

Emily Boardman served as a Youth Education Coordinator at Buzzards Bay Coalition for the 2018-2019 TerraCorps Service.